by Klara Heron
Reading Time: 7 mins read
A A

Klara Heron got a taste of true Japan on a walking tour along the Nakasendo Way, one of the country’s most ancient highways, steeped in history and beauty.

I’ve always had Japan on my list of places to see. I love Japanese food, and I knew it had a rich culture and beautiful scenery, but I always thought a trip to the East Asian country would be a once-in-a-lifetime visit. However, after 11 days touring central Japan, from Kyoto to Tokyo along the Nakasendo Way, I can say for certain I will visit Japan again, and again if I can, because the country has completely stolen my heart.

I did a walking tour along the ancient highway, the Nakasendo Way, which stretches from the ancient capital of Kyoto through the mountains to the modern capital Tokyo. I figured it would give me a good taste of real Japan, plus, I had never done a walking trip and liked the idea of trying something new and seeing new places each day. Walk Japan is a trusted tour company that’s been organising tours along the Nakasendo for decades, as well as many other tours throughout the country, and so I decided to book onto their seven-day self-guided trip at the end of April.

The Nakasendo tour started in a small town called Ena, right in the centre of Japan and around an hour from Kyoto, so my partner and I decided we’d to start our journey there. We flew into Osaka and a high-speed train took us into the heart of Kyoto city within an hour.

The city is famous for its ancient history, as it was once the Imperial capital of Japan and it’s one of most popular destinations for tourists. Despite the huge number visitors, the city feels a world away to anywhere I’ve ever visited before. Old-school taxis line the streets, its temples, shrines and gardens are some of the most beautiful in all of Japan, and we were lucky to catch the last few days of the popular cherry blossom season, which transforms parts of the city into a sea of soft pinks and reds.

It’s also known as the place to spot real-life Geisha, if you wander the streets of the Gion district at 6pm and 8pm, when their shifts begin, you’re likely to see a sudden burst of colour as they quickly shuffle by in their beautiful finery.

We spent two nights in Kyoto and it simply wasn’t enough. There’s so much to take in and enjoy that by the end of our first day we were already talking about visiting again. After a jam-packed couple of days exploring, eating and singing karaoke (has to be done), on the third day we train-hopped our way to Ena to begin our journey along the Nakasendo Way. Walk Japan does a longer, 10-day trip that starts off in Kyoto, but being limited on time we opted for the seven-day itinerary and we went for the self-guided option to allow us a little more freedom. 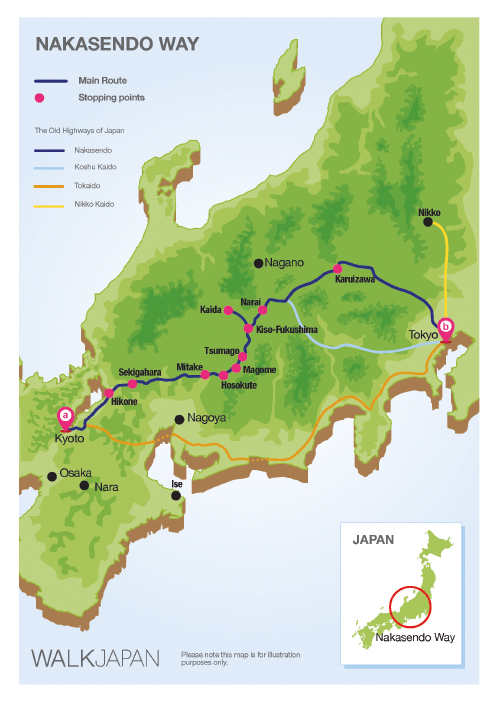 In its heyday in the 17th Century, the Nakasendo Way was crowded with travellers including feudal lords, samurai, merchants, pilgrims and villagers. It was one of two main routes from Kyoto to Tokyo, the other went along the coast, and it meanders through valleys, over mountains and through small villages called post towns. These towns have been providing respite and refuge to travellers for centuries, and still to this day they retain a feeling of another time. As you walk through them you can easily imagine the days of the Edo Period when the samurai ruled supreme.

The self-guided tours are impeccably organised. All of the accommodation is booked and you are given a train pass that covers travel. Most nights, we stayed in a ryokan, a traditional Japanese inn that is usually family-run, where you get dinner each evening and breakfast each morning.

The bedrooms and dining areas are tatami-matted, which means you must remove your slippers, and beds are typically on the floor. It took us a couple of days to adjust to removing outdoor shoes at every entrance, swap into the slippers, and then remember to take them off before going onto the mats – not to mention swapping slippers for wooden clogs in bathrooms – but the locals and innkeepers are well used to visitors getting confused from time to time and are quick to laugh and help you figure it out!

In each bedroom there are yukata, heavy robes like traditional dressing gowns, which you can wear to meals and throughout the house. Many ryokans also have an onsen on site, a communal bathing area built on a natural hot spring. This is another area of Japanese culture that has very specific rules, but once I had brushed up on the etiquette, sinking down into the piping hot water after a long day walking was one of the trip’s highlights for me.

On the first evening, tour booklets were waiting for us in our bedroom. These have everything you could possibly need, from the daily walking maps and train schedules, to notes on cultural faux pas to avoid (tipping is a big no-no, blowing your nose in public is not to be done, and eating while walking is also frowned upon!).

The great thing about the self-guided option is that you can adjust elements of each day to suit your energy levels, the weather, or what you want to see.

For example, on the first day we really wanted to visit a museum in Ena, so we opted to get a short train journey to the midday point, to allow us more time to explore the town that morning. From midday, we followed the walking map as guided, and each day you can adjust as much or as little you like. Another great element of the tours is that your luggage is sent ahead by taxi to your destination each day, so you need only bring a small backpack.

Highlights of the trip

There were so many highlights from our trip along the Nakasendo Way. The very first ryokan we visited was founded in 1624 and is run by three generations, the 13th, 14th and 15th, of the original innkeeper’s family line. The care and dedication they showed to each guest was an amazing introduction to Japanese culture.

The first four days took us through post towns that have been superbly preserved, and while there were so many talking points, the beautiful Magome, where we stopped for delicious coffee in Hillbilly café, and the wonderful inn in Tsumago that once accommodated top samurai and is now a fascinating museum, will stay with me for years to come.

Each day we covered a lot of ground, between 10km to 24km, and one of the most breathtaking days took us on a hike up and over he Magome mountain pass, which included a stop at a traditional teahouse near the top, and stunning waterfalls towards the end.

On day five, on our descent from the Jizo mountain pass down to the Kaida Plateau, we stopped for one of our best meals of the trip in a small bakery run by a husband and wife.

We ate miso pizza while our hosts sang us songs, and the wife, a talented harmonica player, gave a beautiful rendition of Danny Boy. You couldn’t make it up.

On the last day, we hiked through maple forests from Karuizawa town up the to the top of Usui Pass, where views of the valley below and Mount Asama volcano proved some of the best of the trip. Karuizawa is a wonderful large town that has great shopping and eateries, and we enjoyed a tasty lunch while people and dog-watching (Japanese love their dogs, and the dog fashion is nothing short of spectacular!).

The Walk Japan tour finished with a bullet train to Tokyo, and we opted to spend two nights here before returning home. Having just spent a week in rural Japan, it was like landing on another planet, with its exciting energy, neon signs and quirky shops. You could spend a month in the capital city and never see it all, geographically it’s huge, and each of the districts within it is like a small city in itself.

If you only have a short time, I suggest putting on comfortable shoes and walking from the Shibuya district up into the Shinjuku area. It was overwhelming in the best possible way – the street food is incredibly delicious, the bars are noisy and full of laughter and the shops are quirky and fun.

Since we returned, I’ve been trying to convey the impact the trip had on me in a few lines and it’s near impossible. For starters, I recommend booking with a company like Walk Japan as it meant our trip was seamless.

When you visit a country that’s a total culture shock, as Japan is with its own language, currency, food and traditions, you expect to have your guard up. To feel a little unsafe at times, but that couldn’t be further from what we experienced of Japan.

The people are wonderful – they go out of their way to help a confused tourist in a train station, they love when you use their language, even if your pronunciation is terrible, and they laugh at absolutely everything. The culture is rich and runs deep, so ripping off a visitor simply wouldn’t happen. Everywhere is pristinely clean and they’re incredibly proud of their homes – walking through rural mountain towns I saw some of the most spectacular gardens.

For somewhere that welcomes so many visitors from around the globe, their culture is beautifully preserved and their history is palpable. And the food in Japan is amazing – from huge bowls of ramen in Tokyo, to mountain vegetables with rice miso paste in a rural ryokan – we ate it all and didn’t have one bad meal. A trip of a lifetime, and if I have my way, definitely not once in a lifetime.

Walk Japan runs a variety of walking tours around the country, including the bestselling Nakasendo Way tour, a fascinating 11-day trip from Kyoto to Tokyo; prices from JPY 488,000 (€3,975 approx.). The Self-Guided Wayfarer tour starts from JPY 224,000 (€1,825 approx.). Private custom tours tailored to specific interests and requirements can also be crafted by Walk Japan on request. Klara travelled from Dublin to Osaka via Amsterdam with KLM airlines; and from Tokyo to Dublin via Paris, with Air France.

This article appeared in the June, 2019 edition of Irish Country Magazine.