Get kids excited about sea life this summer Beach days should be about more than just sandcastles and splashing in the waves. Try these tips to ignite a lifelong love of sea life in your little one.

There is so much to discover along our shoreline, and this summer is the perfect opportunity to get your child excited about the gems hidden along our coastline. Here are some of the Irish aquariums to visit this summer, as well as some of the creatures you might discover in Irish waters this summer.

There is so much to discover at Sea Life in Bray. Visit the touchpool where kids can get up close and personal with a giant spiny starfish, and learn about the unique albino lobster. There are lots of different zones in the aquarium devoted to different types of sea life. Rivers of the World focuses on creatures from the Amazon, southern Africa and South East Asia like yellow-bellied slider terrapins, red-bellied piranhas and upside down catfish.

The Caribbean Cove is home to a pair of dwarf tail nose sharks, and Merlin, the first cow-nosed ray born in Ireland. The Toxic Terrors zone contains some of the world’s most venomous and poisonous creatures from long-spined puffer fish to red lionfish and honeycomb moray eels. The Tropical Shark Lagoon is home to some of the worlds most iconic sharks, including the Japanese bull head shark. Adult tickets cost €11.25 online and child tickets cost from €8.75. Click here to learn more about the different conservation projects Sea Life Bray is involved with. 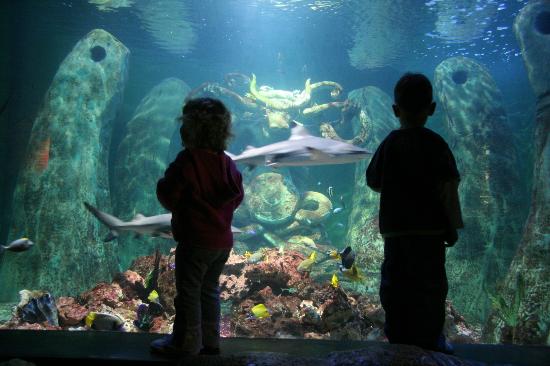 Seal Rescue Ireland is a wonderful charity in Ireland. Not only do they rescue abandoned, sick or injured seal pups around the country, they also rehabilitate them at their volunteer-run visit centre in Courtown, Wexford. This amazing facility brings the seals back to full health and readies them for life in the wild. Call this number if you ever find a seal pup in distress (087 195 5393). And remember, human activity and dogs can frighten mothers away from their pups, resulting in orphaning, so keep your distance if you ever see a pup on its own. They also have sharp teeth! You can support Seal Rescue Ireland’s work by adopting a seal for €30, for which you will get an adoption certificate, seal photos, pupdates and an invitation to the release of the seal back into the wild.

We’ve long been fans of Seal Rescue Ireland, here’s a video of when we visited in 2017:

The tiny town of Dingle is home to an aquarium which is home to Irleand’s largest collection of sharks as well as Gentoo penguins. The aquarium also has a reptile and otter exhibition, with African dwarf crocodiles, iguanas, bearded dragons and boa constrictor snakes. It is also a centre for conservation, with a number of ongoing projects such as loggerhead turtle rehabilitation and release, and angel shark tagging and release for example. The loggerhead turtle is listed by the World Conservation Union as endangered, and as Irish waters are too cold for them to survive, they must be rehabilitated, by encouraging weight gain and treating injuries before releasing back into the wild. Adult tickets to the aquarium cost €15.50 and children aged 4-16 years cost €10.75.

Located on the promenade at Salthill, Ireland’s largest native species aquarium has lots of sea life for kids to get to know. Check out the fin whale skeleton, check out the model submarine, and of course the large ocean tank will have lots of entertainment inside.

Spot puffins from March to September…

This striking summer visitor breed on sea stacks and cliffs during the summer months, and likes to feed its offspring with sand-eel and sprat. Spot them at Great Saltee, the Cliffs of Moher, the Skelligs, and of course, Puffin Island. Avoid the dangerous Lion’s Mane jellyfish, but see what other ones you can find!

The highly venomous Lion’s Mane jellyfish is spotted occasionally by Irish bathers along the East coast, and it usually means a red flag for swimming. In recent years it has been spreading beyond its Irish Sea habitat. They can be up to two metres in diameter, with clusters of tentacles. Find the common or moon jellyfish from April to September. It has four purple-pink rings on its back and a transparent body, and only causes a mild sting. Spot the barrel jellyfish from July to September, and they’re a distinctive white colour with purple lobes around the edge. The yellowish compass jellyfish has reddish brown V-shaped markings and can cause a painful sting. 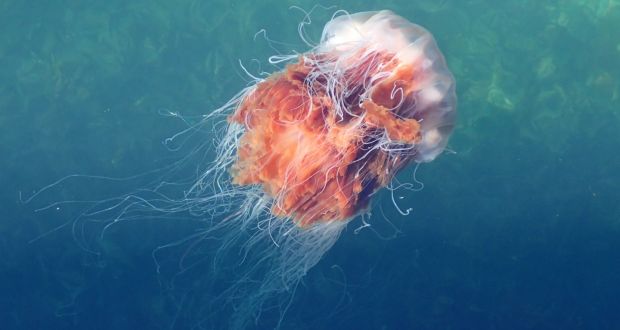 Keep an eye out for the spider crab…

One of the largest crabs found on the Irish coast, you can usually find these guys in weed or rock sea beds, on Achill Island for example. You might find them covered in seaweed for camouflage.

Or this demon from under the sea!

The velvet swimming crab, also known as the devil crab because of its distinctive red eyes, has the ability to swim thanks to its flat back legs. This is an aggressive crab that isn’t afraid to take on bigger opponents, so stay clear! 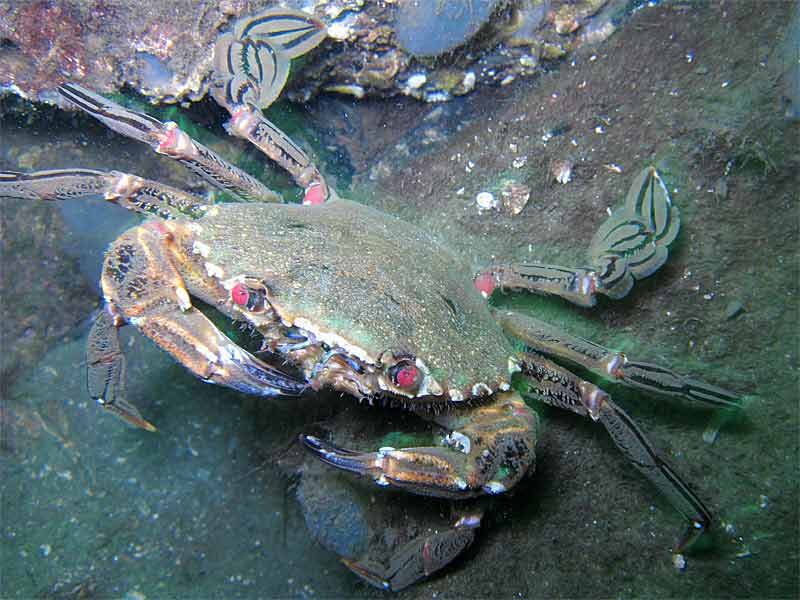 READ NEXT: 18 tips for keeping kids sane during the summer holidays.